Excerpt: Don’t Get Burned by the Forest Service

Laws that protect public lands from destructive activities have reduced most commercial logging in our national forests, but the Forest Service has a loophole to log our trees: fire. Worse, they do it on our dime. Congress always lets the Forest Service take money from the General Treasury to pay for timber sale administration, road building and logging costs, and then the agency keeps the profits from those sales. The Forest Service enriches itself at the people’s expense by selling the people’s trees. This is the incentive for another agency deception: that the forest “will never be the same” without “restoration” work. This presumes forests don’t naturally regrow on their own – which of course they do, in what scientists call “succession,” one of the first ecological processes ever described.

Don’t believe it either when they tell you we might have avoided a big fire if only we had removed “excessive fuels” beforehand. Studies show that logging doesn’t prevent or stop big fires during extreme weather when most acreage burns. But it does enrich the Forest Service.

Fire in the WUI (Wildland Urban Interface) is a threat. The question is how to best address it and minimize the risk. I think most of us want it all: a safe place to live, a vibrant ecosystem with varied wildlife, and a place to find joy. The question is whether that is possible.

It has been a year since we halted the Forsythe Project in Boulder County, CO and the USFS has a “new” Forsythe II Proposal. Despite a year of meetings, field trips, and input from the community, the new proposal looks a lot like the old one. While their justifications and reasons have changed, they are following a pattern they have used for many years – cutting trees – despite recent science that contradicts their justifications.

What are they proposing and why shouldn’t we believe they know best?

The proposal states the intention to

That all sounds reasonable and good, but do their proposals succeed in achieving these objectives? Let’s look at each objective and see whether they pass or fail. 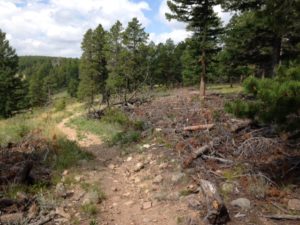